“Media Moving Forward: Reporting on and Using New Technologies” training course took place in Graz, Austria, from 26 November to 2 December. 22 youngsters from 8 different countries, among them Diana, Mariam and Aneta, who were representing Manana Center, took part not only in the main training course, but also had a chance to be part of the European Youth Award festival (EYA). During the EYA the participants learned about digital technologies that are used for social good and how to report on them, they have also met and interviewed the developers of the winning projects. During the whole week participants learned new methods of data visualisation in media, as well as improved their interviewing, photography and video-making skills. 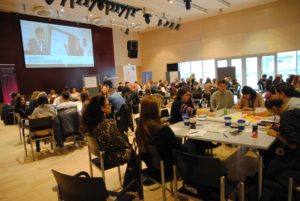 Collaboration with our partners from Sweden

This july representatives of Manana Center traveled to Sweden to meet our partners “Seek...

“Media Behind The Scenes”

The training course (Erasmus+ youth exchange) “Media Behind The Scenes” organised by The European...

“How to Read Media in the Post-Truth Era”

“How to Read Media in the Post-Truth Era” training course took place on 12-19...